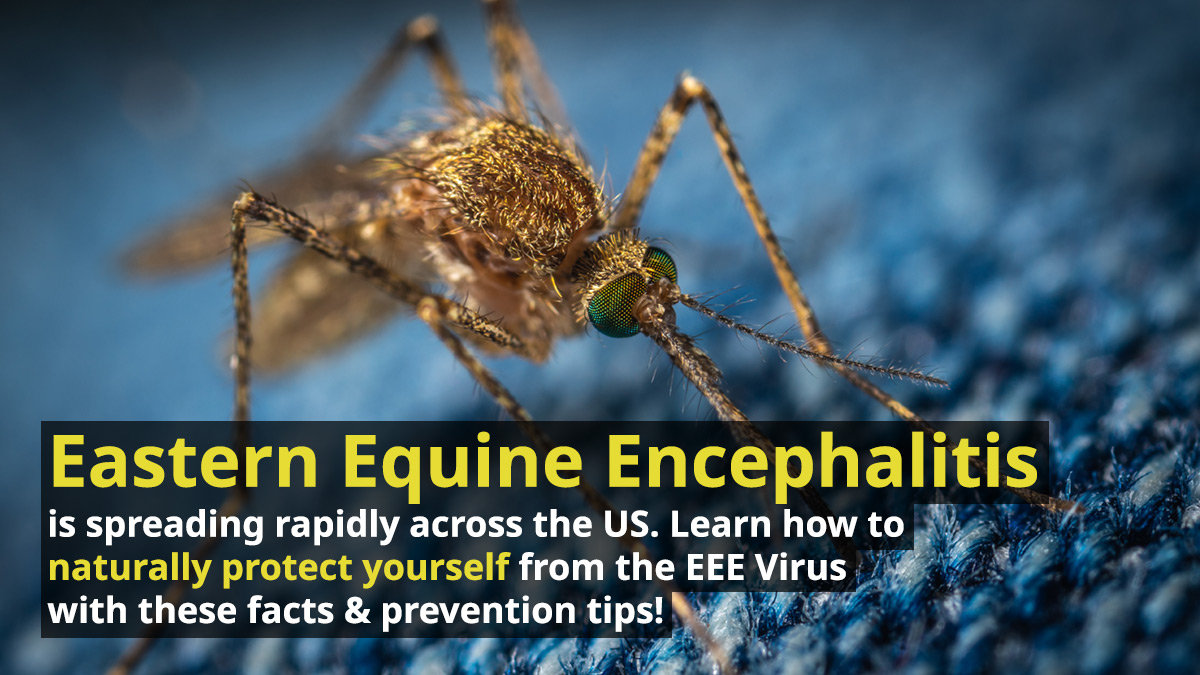 A now 12th person in Massachusetts has contracted Eastern equine encephalitis (EEE) this year, according to the state's health officials. The Massachusetts Department of Public Health lists the 2019 death count at three persons, as of September 27th.

Today, there are over 30 regions of the state considered to be at critical risk for the EEE virus.

And the issue isn't just limited to only people, nor Massachusetts. September also saw the death of two Mexican gray wolf pups at a Battle Creek, Michigan zoo. Though rare, the virus can sometimes infect canines, as was the case here.

But there is a great deal of confusion surrounding Eastern equine encephalitis (EEE). Many people aren't sure if it's an animal virus, or if humans can get EEE.

In short, humans can and do get the EEE virus. Worse, once a person is infected with the EEE virus, they have a 30% chance of death. The stunning CDC statistic has many people asking a lot of important questions about the virus. Worse, the people who do live tend to have a host of neurological issues for the remainder of their lives.

How do you get EEE virus?

And most importantly, how do you prevent EEE virus?

Surely, you're asking those questions now.

We'll explore all these topics and much more in our Eastern equine encephalitis guide.

What Is Eastern Equine Encephalitis Virus?

First and foremost, Eastern equine encephalitis (EEE) has a slew of names associated with the same virus. Depending on your news source, you might have heard it termed under one of the following:

The variations on naming have led to confusion over the virus and its impacts in local communities. Just know that all the aforementioned names refer to the same sickness, which for simplicity's sake, we will refer to as either EEE or Eastern equine encephalitis.

No matter what name you choose to give to EEE, the results remain the same; EEE is a deadly virus that's expanding its reach, particularly in portions of the Northeast.

EEE virus, as mentioned in our introduction, leads to death in 30% of the infected. Survivors are often plagued with a series of neurological issues.

The virus, though still considered rare, causes severe inflammation of the brain.

How Do You Get EEE Virus?

EEE virus spreads by way of mosquitoes. In simple terms, when an EEE virus infected mosquito bites a human, they can transmit the virus to the person. In scientific terms, the EEE virus is a mosquito-borne arbovirus. This means the virus targets the human or animal's central nervous system, which leads to cases of death or complications.

EEE Virus Regions: Where is it Found? Which Mosquitoes Transmit It?

The EEE virus is mostly found in the Gulf Coast or Atlantic states. In concern with Gulf Coast states, it's more an issue in eastern portions. It is also found in Central and South America, as well as portions of the Carribean.

But it can be anywhere that has mosquitoes, which is illustrated in the Michigan zoo cases.

Here's a regional breakdown using an EEE virus map, courtesy of the CDC's ArboNET, that shows the virus density per state. 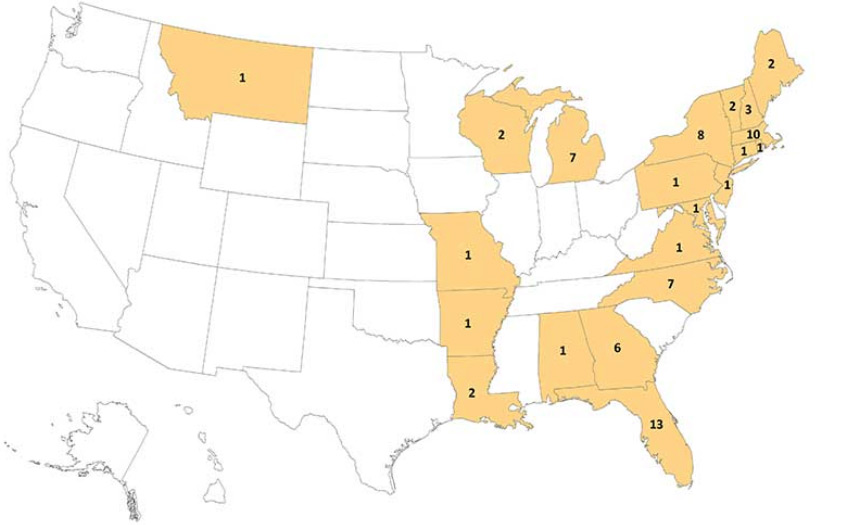 As you can see from the EEE virus map, the virus tends to happen mostly in the Gulf States and Northeast states. Florida tends to have the most overall cases, but places such as Michigan, which border a major lake, also have occurrences.

That might sound a bit messy in terms of how the chain of events goes down, just know that mosquitoes pick up the EEE virus from infected birds.

The main transmitter to humans is the cattail mosquito, but many other marshes or standing water type mosquitoes can and do transmit the EEE virus to humans.

In other words, you'll be hard-pressed to determine safe mosquitoes. If you live in a region, such as the Northeast/Massachusetts, any and all mosquitoes should be considered unsafe for purposes of EEE virus prevention.

For the most part, people get few symptoms when first infected with the EEE virus, making diagnosis a complex situation.

Other people experience a mild set of symptoms such as headache and fever, maybe a sore throat. The problem here, of course, is that these mild symptoms are typically associated with far less threatening illnesses than the EEE virus.

When the EEE virus begins to wreak havoc on the central nervous system, things change dramatically. A person might reach a temperature of 103 to 106 degrees Fahrenheit. Many people will suffer painful stiff necks and migrain type headaches. Both comas and seizures are not out of the question. Again, ⅓ of these people will not survive. Those who do often suffer permanent brain damage.

To determine if you have EEE virus, your doctor will perform a blood test.

Unfortunately, EEE virus has no good treatments. Due to its status as a virus, antibiotics aren't effective.

Instead, treatment of EEE virus means hospital care that focuses on treating symptoms, rather than curing.

If you've recently been bitten by a mosquito and fear you might be infected with the EEE virus, see your doctor immediately.

When it comes to preventing EEE, there are no Eastern equine encephalitis vaccines, instead, people must lower their mosquito bite risk.

Let's look at the best ways to lower you and your family's mosquito bite risks and thus, help prevent the spread of the EEE virus.

There's a lot of controversy surrounding tick and mosquito yard treatments. Mainly, people are concerned with exposing children and pets to harsh chemicals.

But it doesn't have to be that way.

During the warmer months, you and your family spend time on your deck or patio, or in your pool. The strategic application of Mosquito Ranger helps make these areas safer and habitable for children and pets.

The starting point for preventing mosquitoes and preventing EEE virus begins and ends with the home front. Make your yard safe by treating it.

Learn more about Mosquito Ranger and if it's available in your area here.

Remove Standing Water From Your Property

If you want to attract mosquitoes, leave standing water on your property.

Mosquitoes love standing water. Property owners often miss things such as birdbaths, empty plant pots, or puddles that liter their yards and serve to attract mosquitoes. Before you do anything, find all instances of standing water and remove it if at all possible.

If you have a pond, consider getting it removed. Mosquitoes are attracted to still ponds because they feed on minnows and guppies, and other things. Some pond adoring property owners can treat their pond with a natural bacteria called Bacillus thuringiensis. This bacteria kills off mosquito larvae but is said to be safe for humans and animals.

You can also allow gambusia in your pond. Gambusia eats mosquitoes, hence, mosquitoes tend to avoid those ponds. Higher frog populations are associated with lower mosquito density. Therefore, it's advisable to landscape around the pond to allow frogs to thrive.

The idea that a homeowner must drench their property in chemicals in order to stop mosquitoes is pure myth.

Not only will your yard naturally repel mosquitoes, but it will also add some authenticity to your home cooking! 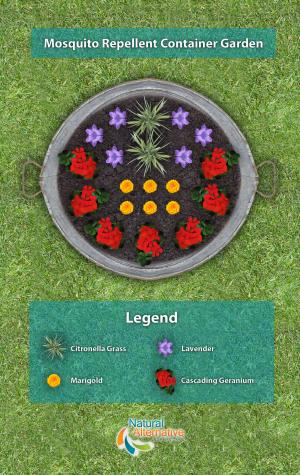 Read on to learn more about natural mosquito repelling plants.

Mosquito Repellent For The Win

When it comes to mosquito prevention, self-preservation is an intelligent starting point. It's easier to control your own body than it is everywhere you visit.

However, the fear of harsh artificial chemicals soaking into their skin causes many people to have reservations.

But it doesn't have to be that way.

Natural Alternative, the DIY member of the NaturaLawn family, offers a 100% organic mosquito spray that lasts for hours, is DEET-free, has a refreshing fragrance, and is easy to carry along with you for personal mosquito protection that you can control! 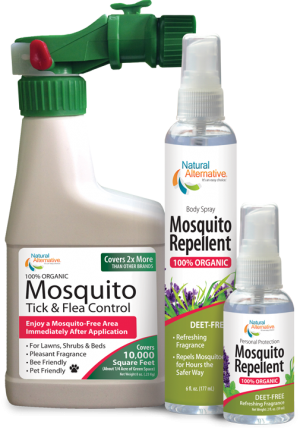 Well, not mosquitoes. The more bats, cats, and birds your property has, the fewer mosquitoes it will also have.

Mosquitoes love dark clothing, so even though Labor Day may be in your rearview mirror, consider wearing lighter clothing. Additionally, wear pants and long-sleeved shirts to reduce exposed skin.

Remember, when you reduce mosquito exposure, you dramatically lower your odds of EEE virus infection.

In Massachusetts, a state with EEE virus critical risk status, many Friday night lights football games and practices that happen during dusk or night are now moved to day time hours.

And this makes sense, seeing that mosquitoes are most active at dawn, dusk, and night. In fact, the first few hours of night yields the highest amount of mosquito bites.

If you typically jog in the late evenings, find a better time earlier in the day. Even if you use mosquito repellent, exposing yourself to the highest mosquito feeding times is not wise.

There's a lot of buzz about the promise of an EEE virus vaccine, but the problem is, it isn't ready for public use.

The main problem that prevents the EEE virus vaccine from public use is that its prevention is short-lived, making it impractical for the general public. You'd need the vaccine many times a year in order to keep your EEE virus immunity status.

But the recent upward trend in EEE virus cases and even deaths may usher in change on this front. Only time will tell.

When a horse is infected with the EEE virus, the symptoms come on fast and furious. Typically, the horse will experience an extreme fever along with head, shoulder, and neck issues. It will experience difficulties in walking. And it likely dies within just three days of the infection.

EEE virus prevention for horses is consistent with the same ones we listed above for humans. You must prevent/reduce mosquitoes on your property in order to limit the potential for EEE virus exposure.

EEE virus is a deadly illness spread by mosquitoes. While it mostly affects the Northeast and Gulf Coast states, it can occur anywhere mosquitoes populate.

EEE virus has no cure, nor any vaccine to prevent it. Instead, people must use mosquito prevention methods to help reduce their odds of contracting the virus.

There are a number of natural mosquito prevention methods that have been proven effective. With a little effort, you can help reduce the chances of the EEE virus in your family.